Chinwa was a website with some Chinese language learning resources: HSK lists in French and English, and some grammar points explained.

I built learning lists with audio from these resources and Anki decks.

Chinwa was a website with some Chinese language learning resources: HSK lists in French and English, and some grammar points explained. The website is no longer online.

I earlier got some of their stuff and built learning lists with sound in different format: xml, json and csv.

These lists can easily be imported in Anki, or another program.

I made an Anki deck with sound: most of the sounds come from the Shtooka project Shtooka project or on my website which maintains a copy of it (I added some missing parts) Yojik Website.

The missing sounds were created by Text To Speech: I tried many flavors of the system and ended using the sounds produced by Google translate. I wrote some script to automaticely download the sounds.

I extracted the lists from the web pages. I built csv (comma separated value) files from the extraction:

Here is an example:

I added some fields: traditional writing, origin, sounds, so I got this:

The transformation program is written in nodejs/javascript: Ididn't know well the language at thi time, so, I decided to deep a bit with real problem solving.

The Anki decks are created by importing the .csv files.

I created different notes, to exercise different parts of the language.

There are 7 different ways to learn:

Exactly the same than Norma deck, but in the other way: English/French displayed, Chinese guessing. 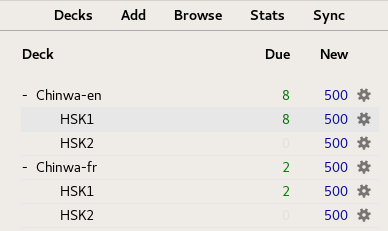 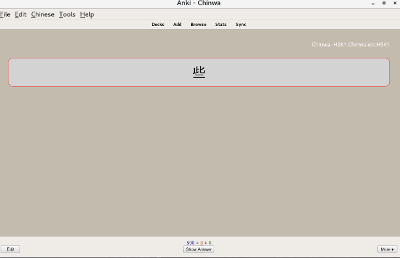 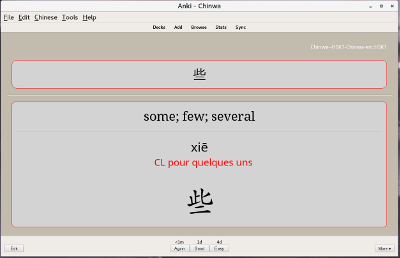 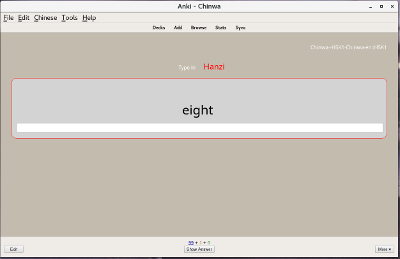 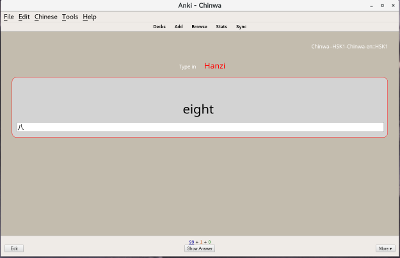